As the name suggests, this is a modular camera slider. I designed a generic dovetail connection which can be expanded. You can make a slider which only moves the camera linearly from point A to point B and you can add rotating platforms in between to make it rotate too. The generic dovetail connection has a safety feature in it that once the set screw is not fully tightened it can’t fall out due to the slot. Because this is generic I use it for my tripods as well and have one single camera mounting system for everything! I made a video in which I showcase this design together with some awesome camera movements and time lapses, enjoy!

PROPER PRINTING PROVIDES THE SOFTWARE AND DESIGNS TO YOU “AS IS” AND WITHOUT WARRANTY OF ANY KIND, EXPRESS, STATUTORY, IMPLIED OR OTHERWISE, INCLUDING WITHOUT LIMITATION ANY WARRANTY OF MERCHANTABILITY, FITNESS FOR A PARTICULAR PURPOSE OR INFRINGEMENT. NO ORAL OR WRITTEN INFORMATION OR ADVICE GIVEN TO YOU BY ANY PROPER PRINTING EMPLOYEE, REPRESENTATIVE OR DISTRIBUTOR WILL CREATE A WARRANTY FOR THE SOFTWARE, AND YOU MAY NOT RELY ON ANY SUCH INFORMATION OR ADVICE.

On a less formal note: Don’t hold me responsible if your expensive DSLR camera falls down on the floor for whatever reason.

I printed everything out of ABS, but I’d suggest to use a stiffer material like PLA, carbon filled filaments or polycarbonate. The base of the rotating platform has an edge along the circumference which has to be removed. This is done to make it able to be printed out of ABS.

The download contains a bill of materials (BOM) together with an exploded view which can be used as reference and to purchase the parts needed. Things you have to keep in mind while mounting this are mentioned in the notes of the BOM.

Everything should work now. It’s a lot of information and I had to figure out a lot of stuff to get this working so chances are that I’ve missed something in this explanation. Please let me know when something is missing or is explained incorrectly.

The download consists out of two Blender examples. The Python script which can be found in the scripting tab is originally made by Stephen Hawes. I added some functions to it, among them:

I couldn’t get this to work in Windows so I used Linux. I made a dual boot system, but a virtual machine or Linux subsystem (if you want to go crazy) would work too. This also works on Mac since Steven uses that for some reason 😉

The camera has three possible movements, X, Y, Z and Extrusion. The X represents translation, Y horizontal rotation and Z vertical rotation. The extruder is used for modifying the camera viewing angle. These movements can be animated in Blender within the animation tab. This shows a timeline from 0 to 3600. This value can be changed at the bottom if preferred. The location X of the CameraObject is used for translation in meters. This can be found in the Object properties (orange rectangle). The Y and Z rotation are adjusted with rotation Y and Z respectively. To modify the viewing angle you need to select the camera. This value can be changed in the Object Data Properties (green camera symbol). This is represented in the images below. 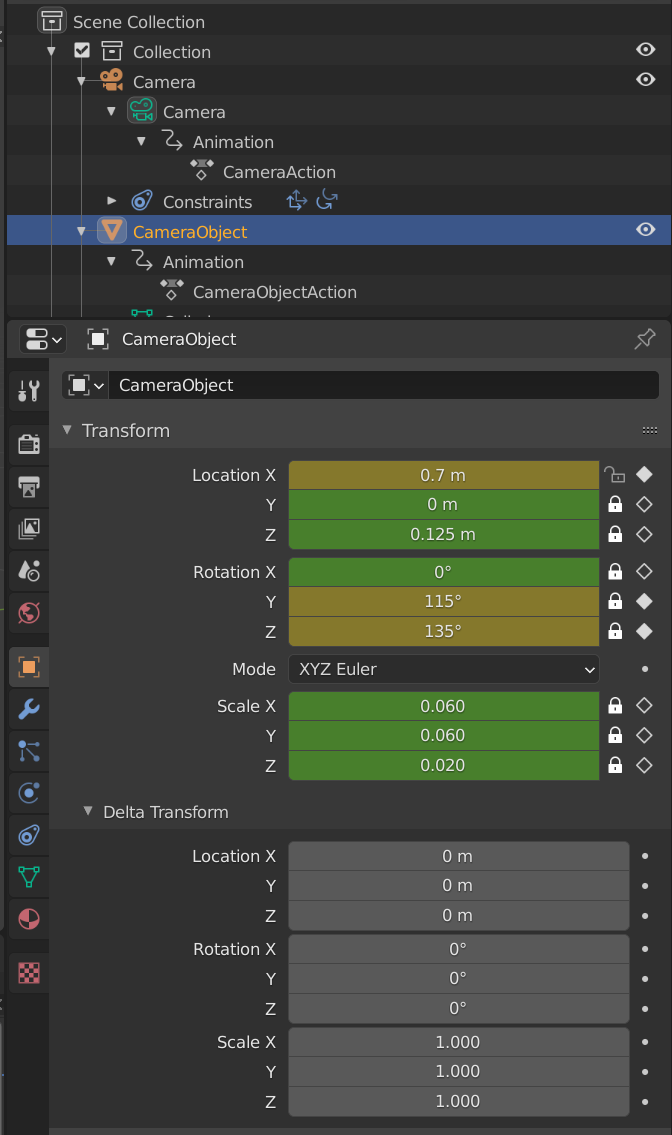 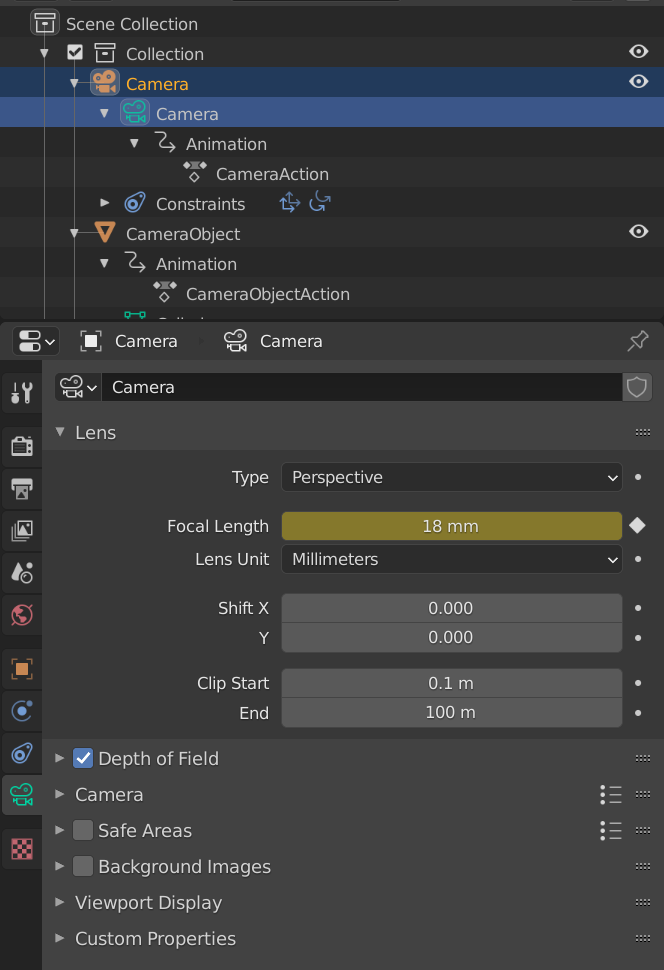 Be aware that the initial position of the camera is at the beginning of the linear movement, facing straight forward and horizontal. The lens can be zoomed all the way in or out depending on the setting within the script.

There are no reviews yet.

Be the first to review “Modular camera slider” Cancel reply