This is an experimental extruder that uses timing belts to push the filament. The idea is based on the filament manufacturing process and I miniaturized this. This is in its experimental stage, so things might change, but it seems to work very well. I managed to print the world’s most flexible filament with it!

*These are settings for resin printing which is recommended. However, it’s designed in such way that it’s printable on an FDM printer. Since the motor needs quite a lot of force to print reliably and it can’t get rid of its warmth, it’s recommended to use ABS, Nylon or polycarbonate for the motor bracket. Chances are that this can be mitigated when using it in a bowden configuration by mounting it on the standard aluminium mounting plate (standard Creality printers) between the motor and bracket. This is not yet verified!

The FDM version of the base plate has a custom support around the circumference. This way, the base plate can be printed with the flange needed to print the flexible filament. This support can be removed with pliers and a knife. The picture below shows the bottom view of this part with the proper orientation:

The picture below shows the right orientation for all parts

I oriented all resin printed parts flat, 5mm floating above the build plate. Basically the same orientation as the logical FDM print orientation. This puts more stress on the FEP-film, but results in better prints in my experience. This makes it possible to sand away the left over support with waterproof sandpaper (400-800). The picture below shows an example of the orientation I use: 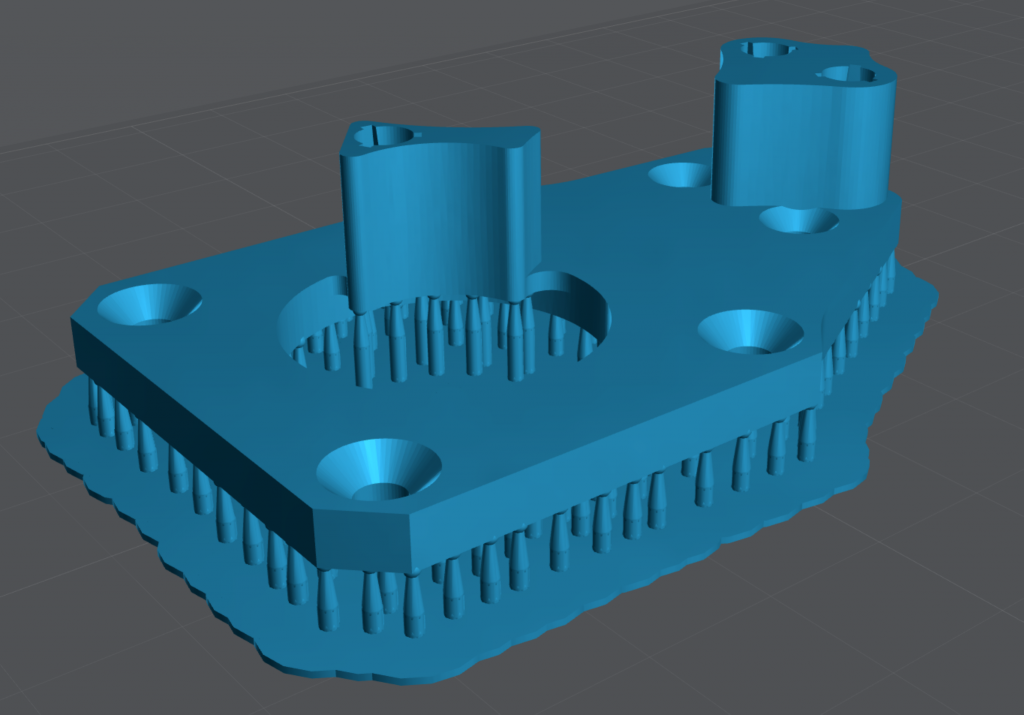 I use Lychee slicer and if you have questions, leave a message on the about page.

All 3D printable parts must be printed once except for the coupler gear (2×) and modified pulley (4×). There are two variations. One which uses specialized parts and one which uses standard parts.

*Commissions are earned from the links above which help funding this project. If you have found a better alternative for a component, please let me know!

General notice: All holes for the inserts are designed to be glued and pressed into place without using heat. This way it’s more accurate and the inserts can be placed in resin printed parts. Pressing and gluing the inserts before curing the parts is recommended.

The bottom of the front plate is designed as an adapter mount. This enables to fit multiple after market hotends. At this moment, only a bowden adapter and CR-10 stock hotend adapter is available. It’s recommended to use the bowden adapter, also for a direct drive setup. You can place the extruder directly above the hotend with a short tube. The idea is to develop several mounts with different mounting options. There is a STEP file added to the download of a blank tool holder, so you can develop your own for your specific setup. I’m going to post updates on Twitter if I developed a new mounting system so make sure to follow me!